EvImSync requires .NET Framework 4. You can get this via Windows update or directly from here.

Details: how it works

EvImSync uses the Evernote script engine ENScript.exe to import and export notes. These notes are parsed and then compared to emails in your Gmail account using the IMAP protocol. This requires that you have enabled IMAP in your Gmail settings:

You can sync one notebook with one folder in a Gmail account. EvImSync allows you to sync as many notebooks and Gmail folders as you like.

Due to limitations both in the IMAP protocol, the Evernote scripting engine and the available documentation, the synchronization is not perfect. Some things simply can't be done by EvImSync.

EvImSync does not require installation. It can be run from any place. Just double-click on the file to run it.

EvImSync needs to know which Gmail folder it has to sync with which of your notebooks in Evernote. To do that, you have to enter this information in the configuration dialog. You can get to that dialog via the File->Configuration menu. 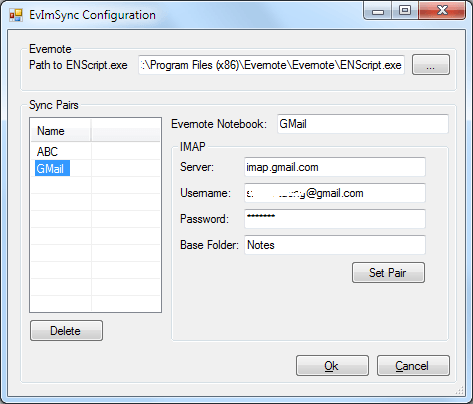 After you've set that information, click on the Set Pair button to store the Gmail/Notebook pair. You can configure as many pairs as you like.

If you've set up at least one sync pair, just click on the Start Sync button to start the synchronization. Depending on how many notes/emails you have, this might take a while though.

In case you encounter a bug or some other problem, please file an issue in the issue tracker. If EvImSync has problems with the encoding of emails, please save the email as an eml and attach it to the issue. Otherwise filing the issue is useless since I won't be able to reproduce the problem and therefore won't be able to fix it.

EvImSync is open source (GNU GPL v3). You can get the source code from the SourceForge project page.

If you just want the compiled application, get it from the download page.